I think that delegation to another person is analogous to programming a computer. I want to explain why I think this, and how thinking like this can be useful.

Programming as a discipline has developed loads of ways of making code better. That might mean more efficient, easier to understand, easier to maintain etc. The general term for this tidy up process is refactoring. If you think of delegation as a function call to a human then you can refactor the way you do things to make them better. 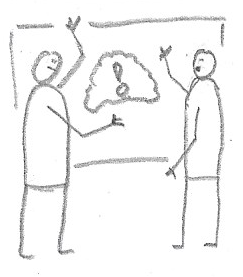 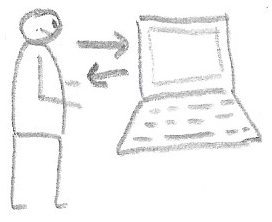 Lots of tasks are too big for one person to do. Most orgs use some kind of hierarchical model to get these kinds of big jobs done. This means concentrating power and responsibility in the hands of one person who then breaks the job up into tasks. They then assign those tasks to someone else to do.

Saying someone else is a lazy way of saying entity with the capacity to get the task done. That might be a future version of themselves, or another person, or a donkey or a computer. All that matters is that there are two entities that are capable of developing a shared understanding. Once that understanding is in place the other entity can go off and do the task.

If we explore that in a few ways: 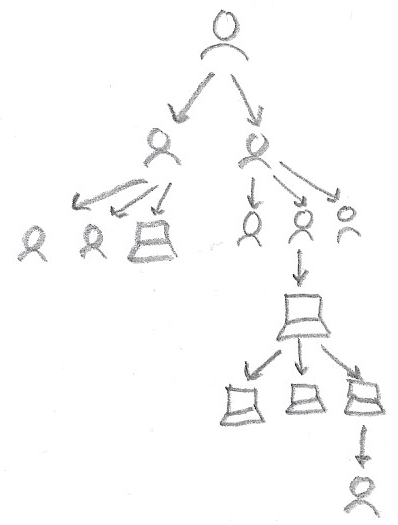 None of these are perfect examples, but they give you the idea of one agent getting another agent to do something for them. Usually this is more like a chain, where one person delegates down the chain to get things done[1. realistically it’s much more complicated once you need to interact with customers etc. Triggers come from all over the place, but they can probably be abstracted away with subsystems. The more important question is if that’s a good idea. This is just one way of thinking, a wrong model if you like.].

Programming a computer is just delegating to it using a tightly controlled set of commands. In human-human interaction we use empathy to substitute for precision. Computers are short on empathy, but good at precision and attention to detail.

Computers will do whatever you ask them to do, but only what you ask them to do. They are very fault prone. If you ask them to do something and you haven’t given them an explicit instruction for what to do if it goes wrong, they’ll stop. If you have managed to program them to do your bidding they’ll continue to do that flawlessly for as long as you like!

People are incredibly fault tolerant. They can find all kinds of ingenious ways to complete their tasks in the face of adversity. The problem is that they lack precision, so getting to a shared understanding is difficult.[1. Dave thinks that the precision problem is too great. This might as well be a problem of kind not degree as compilers can’t handle the ambiguity. I’m more optimistic and think that we’ll develop a way that we’ll be able to do natural language programming soon.]

All kinds of delegation need some kind of shared understanding. A computer does this by having libraries of functions and people do it by having common life experiences. If two humans have a common language they can communicate commands incredibly tersely. A great example of this is ER staff communicating a patient’s state and what they need to do next. This common language takes a long time to develop and it is like learning the commands in a programming language. If people don’t share an explicit set of commands then the ambiguity is a problem but not an insurmountable one. It just needs the two people to negotiate more[1. a lot of the problems I see in life come from people not developing enough shared understanding. I’ve just started reading about this a bit in User Story Mapping by Jeff Patton.].

A more difficult task might be convincing you that thinking this way is a useful mental tool. My reasoning goes like this:

This isn’t very complicated. The useful part comes when you think about a frontier of automation. As technology gets more sophisticated that frontier keeps moving closer to the initial delegator.

Once you have the idea of a frontier of automation you can blur it a bit. There are things that you:

The second two are prime for delegation. Using the mental tools developed by programmers you can think about how to best get things done.