Goodreads released my 2019 reading stats this week, which nudged me into finishing a project that’s been on my mind for a while now. 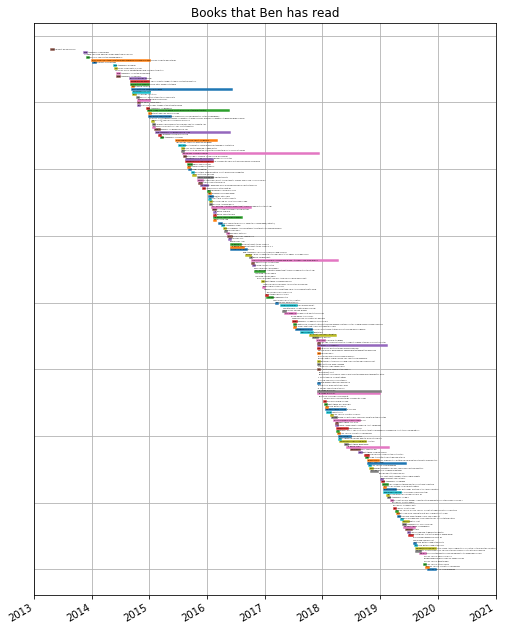 I’ve made the graphs here using the data I record in Goodreads. That gets updated when I start a new book on my Kindle, or if I put it in manually when I read a paper book.

There seems to be an odd, and annoying, thing where Goodreads have two APIs. One of which is quite good, and is used to generate their website. The other is total garbage and is exposed to the public. This is surprising, given that Goodreads belongs to Amazon, and therefore has access to all their book data, and people who know about AWS and how to make things like Goodreads work well. Anyway, this results in only about half the data being available through the API. Once I’d done that first pass, I put everything into a spreadsheet and then went to the Goodreads website to get the rest of the data. Clickety click.

There are still issues, like the big flat spot in the waterfall graph at the end of 2017. Those books shouldn’t be there, but I haven’t got onto finding where they should be. Another day.

The thing that spurred me into looking at this was to quantify the diversity of the books that I’m reading. I’ve always had a vague idea in by head that I would try to read a fiction book, then a non fiction. 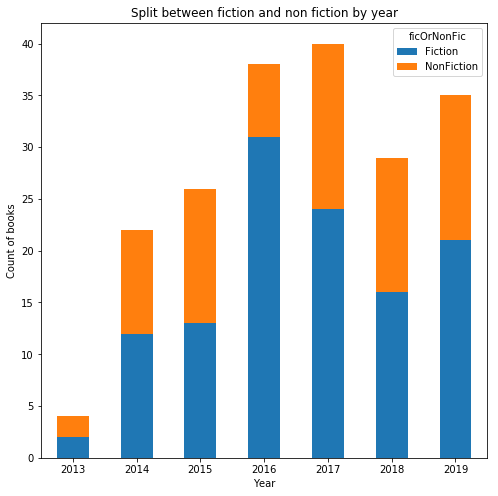 Turns out that the ratio usually sits a bit more like 2/3 fiction.

Given that I fail at keeping my fiction habit under control. How am I doing with reading authors who are different to me?

(Secret: I think fiction is super enjoyable and useful, and if you’re one of these people who don’t read fiction, then you’re really missing out!)

Turns out that even with a concerted effort over the last couple of years, still pretty bad! 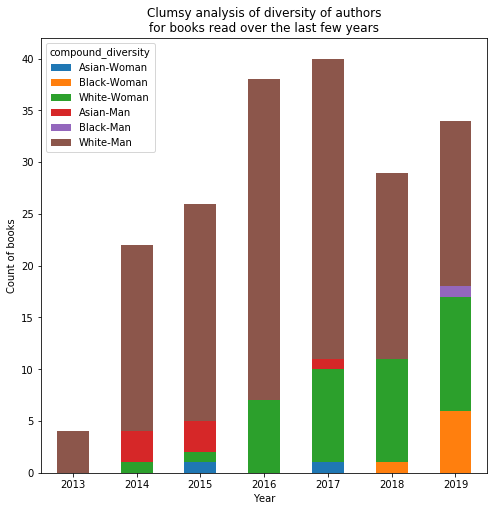 This is going to need a bit of unpacking: 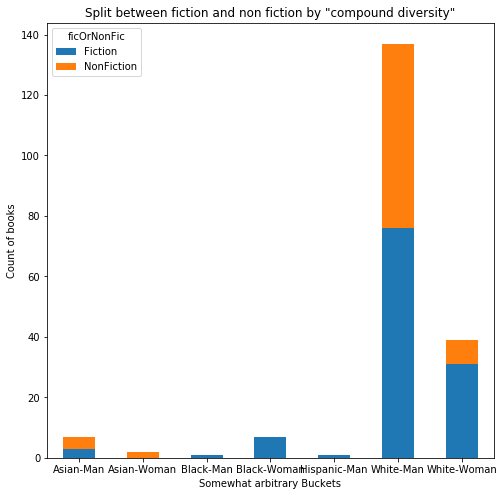 Some blunter stats about this: 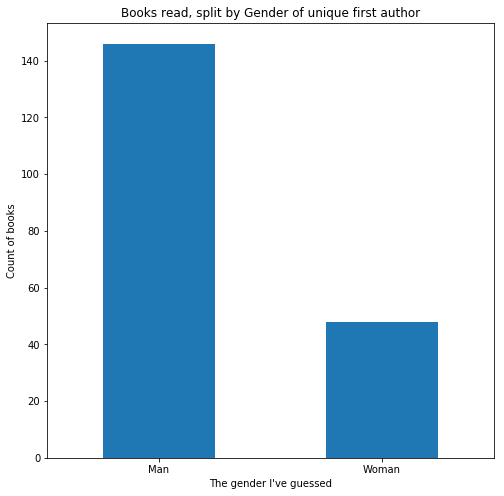 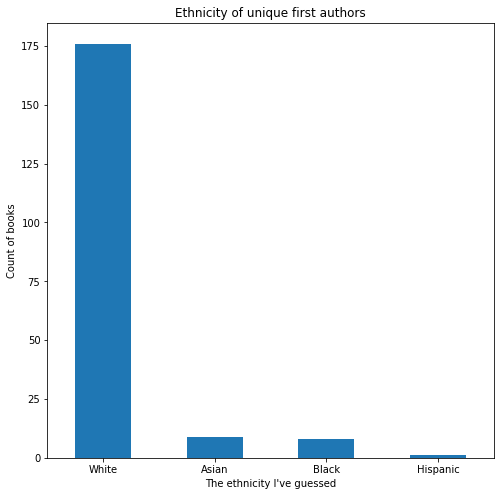 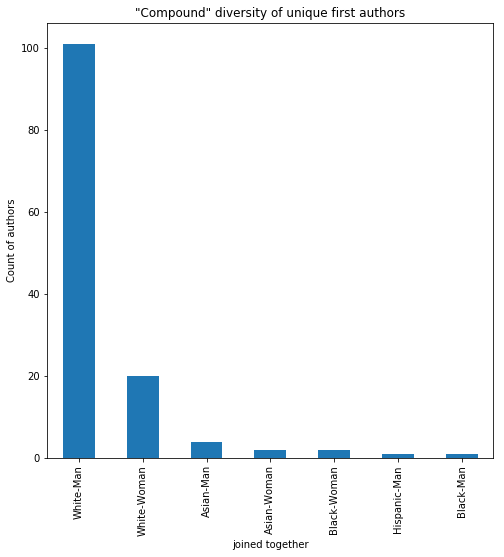 What about the books themselves? 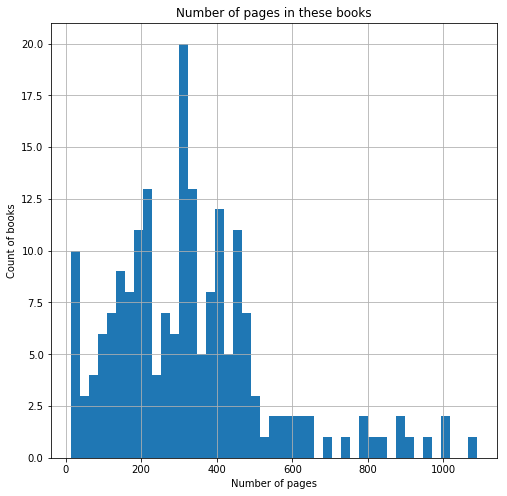 This makes sense, the number of 1000 page Neal Stevenson epics is offset by some 30 page comic books.

I stole an idea from someone a while ago, that books are mostly a long term medium, so if a book is good now, it’ll be good in 5 years time, but if a book is crap now, it will have disappeared in 5 years time. Therefore, it makes sense to wait a bit. From this graphs, it looks like I’m terrible at taking that advice too. 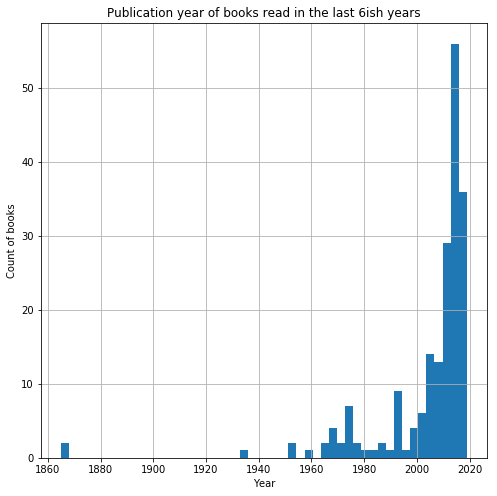 That might not be strictly true. I read the Odyssey this year, and that’s listed as 2019 because it’s a new translation. 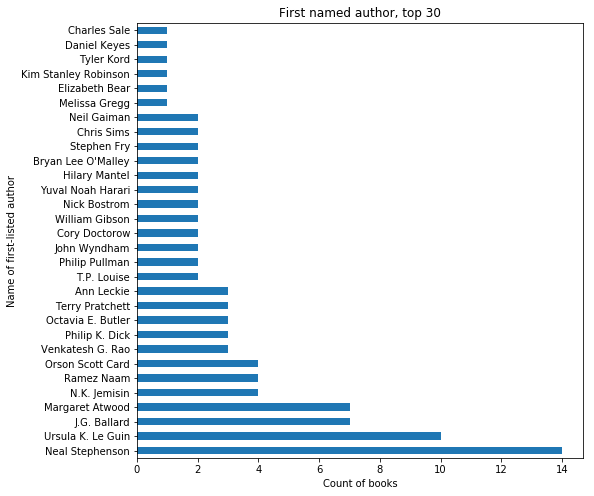 All my repeat authors over 2 are fiction. You can also see that a lot of my diversity comes from pounding fiction series.

But did I like it? I love reading, and people say that I’m a soft rater, giving almost everything a 4 or a 5, but I have a lot of people who recommend books to me, and I abandon books that are turning out to be a 1 or a 2. 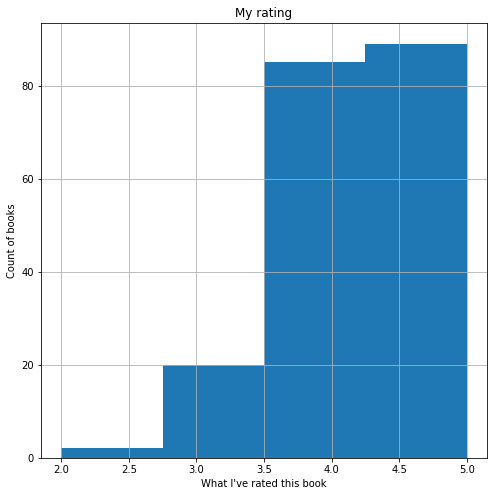 The waterfall is impossible to read as a png, so here’s a pdf.

Charlie asked me what this looked like if I looked at total pages read rather than book count. It turns out, not that different but there are some interesting things.

That page count split lead me to:

Which, given the prevalence of male pages in the previous graph, is a bit of a surprise that they’re so equal. Perhaps just an aberration?

Surprisingly—to me—it looks like I’ve only read one book by a black man in the last 6 years (William Gibson’s Alien 3 #1 by Johnnie Christmas) and one book by a Hispanic man (One Hundred Years of Solitude by Gabriel García Márquez). Perhaps some kind of more forceful intervention is needed?